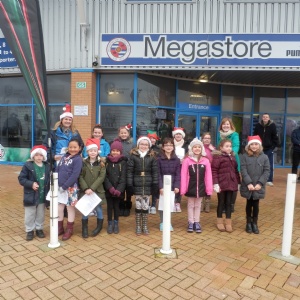 On Saturday 12th December, Singing Club were invited to sing at the Madejski Stadium for the London Irish rugby match against Edinburgh.

We took 15 children from years 3-5 and their parents/carers, and had a wonderful day.  We were well looked after by the London Irish staff at the stadium, who provided us with opportunities to sing at different locations in the venue. We began our day with a tour of the stadium, and were lucky enough to be shown inside the changing rooms and see how well looked after the players are. This was followed by carol singing to arriving fans outside the megastore. Afterwards, we had a chance to visit Digger's Grotto and have a photo with Digger, the London Irish mascot.

Children then had the opportunity to ask a few players questions before we sang on stage in the Craic with the on-stage band. We even had an encore!

Finally, we watched the rugby game - a first for many of our children. We sang songs with the crowd and enjoyed cheering for the London Irish team. The final score was 36-6 - a fantastic win for London Irish.

We would like to thank the London Irish team for inviting us along for the day and their amazing hospitality, as well as the parents and carers for allowing their children to take part.